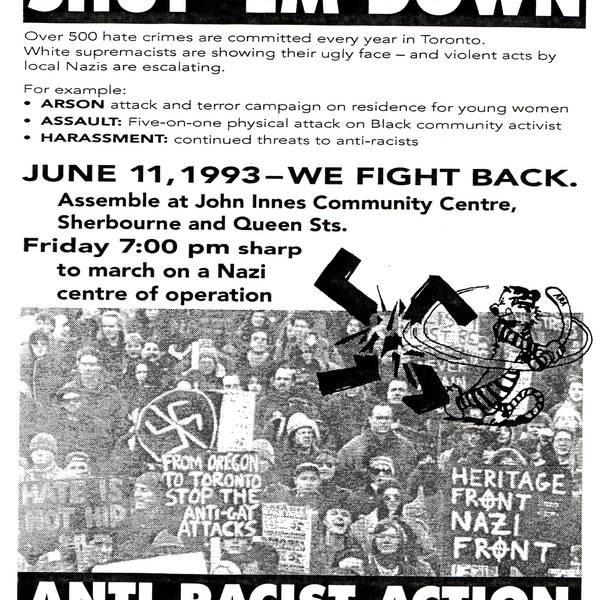 On June 11, 1993, the Toronto Anti-Racist Action organized a protest sparked by racially motivated attacks in the city, including the beating of Sivarajah Vinasithamby, a Tamil man who was attacked and left paralyzed by Jason Hoolans, an affiliated member of the Church of the Creator and Heritage Front. The ARA announced plans to “march on a Nazi centre of operation” with an east-end assembly point.

This statement was interpreted by Ernst Zundel, his supporters and Toronto police as being a march on his house. Police surrounded his house, and Zundel covered the house with a plastic sheet - to protect it from eggs and paint being thrown at the house.

Instead, the ARA march headed for another east-end home, the home of Gary Schipper, leaving the police to guard Zundel’s home for no reason. Schipper was known as the voice of the Heritage Front, running their telephone hate hotline from his house. When activists got to his neighbourhood, they distributed pamphlets to his neighbours about why they were marching on his house. Several activists threw items at the house and smashed the windows. This action resulted in a lot of media coverage, and all local outlets ran stories about the protest - highlighting that the police were manipulated to be diverted from the real target.