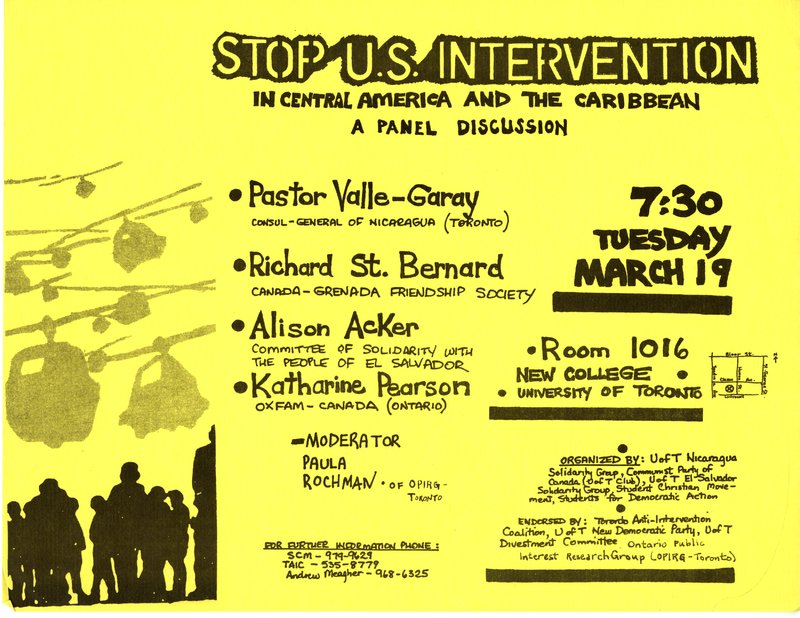 By way of its organizational mandate to provide action, education and research on environmental and social justice issues, OPIRG not only develops and spearheads its own campaigns within the community but also provides solidarity to external campaigns by offering financial, promotional, and material resources.

In the early 1980s the Canadian government began running military drills at a military base on the Innu territory called Nitassinan (Labrador and Eastern Quebec). There, the military ran frequent low-level flight training which caused very loud and sudden noises. Local Innu activists and allies opposed this low-level flight testing because it negatively affected local physical and psychological health, scared away the caribou, and polluted the land, air and water.

In the late 1980s the Innu, led primarily by women and children, began a campaign of non-violent civil disobedience at and around the military base. While they remained on the front lines fighting to defend their communities against harmful low-level flight testing, they called on allied organizations in Toronto and elsewhere to engage in solidarity actions.

In Toronto, various peace and disarmament organizations including ACT for Disarmament, Canadian Peace Alliance and the University of Toronto Campaign for Nuclear Disarmament offered solidarity from afar, organizing campaigns against militaristic expansion in Nitassinan and fundraisers to support Innu resistance. In 1986, OPIRG Toronto organized a panel in Toronto featuring two Innu band members, David Duke and Bart Jack to speak to Torontonians about the negative effects the base was having on their communities.

The Canadian government responded to protests by claiming that they would close the base in 1996, but in fact continued low-level flight testing until 2005. 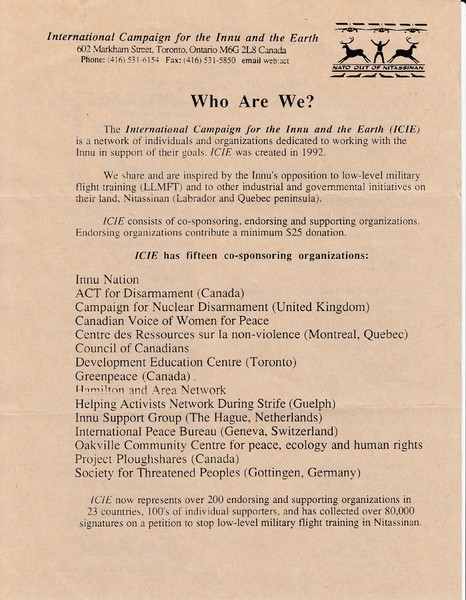 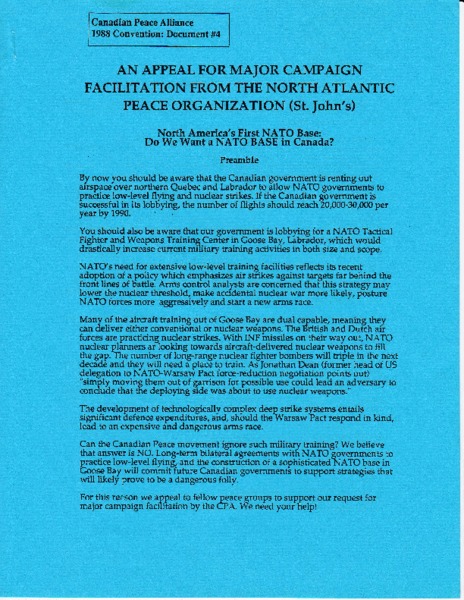 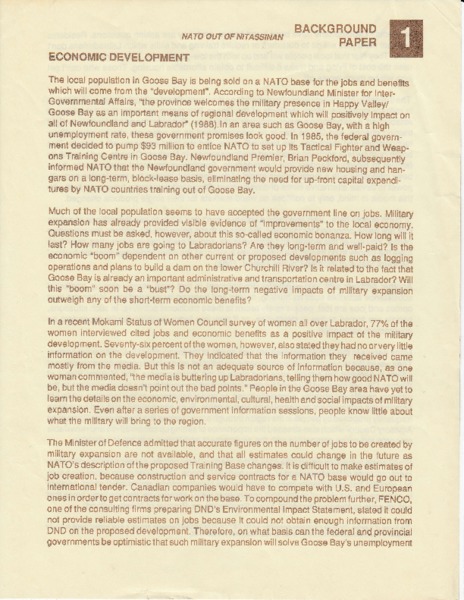 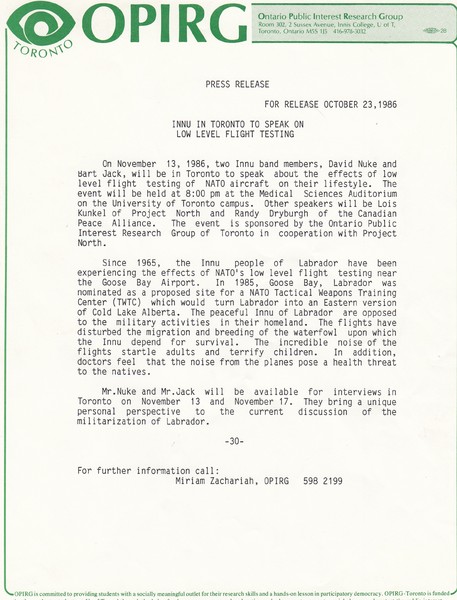 In 1989 the mayor of the Town of Oka in Quebec announced that they would expand a then nine-hole golf course onto land claimed by the Mohawk of the Kanesatake reserve called the Pines. Mohawk warriors set up a blockade to prevent the expansion and on July 11, 1990, at the request of the Oka mayor, they were attacked by the Sûreté du Québec. That same day Mohawk Warriors from Kahnawake blocked the Mercier bridge into Montreal in solidarity with the Warriors at Kanesatake.

While Mohawk Warriors remained on the front lines to defend their territory, they requested solidarity from allies across the country. In Toronto, allies organized protests and political pressure to force the Quebec and Federal government to withdraw the police and military from the area. They also collected donations and supplies to support the Land Defense.

In response to the Mohawk Resistance the federal government eventually purchased the Pines and the golf course expansion was cancelled. 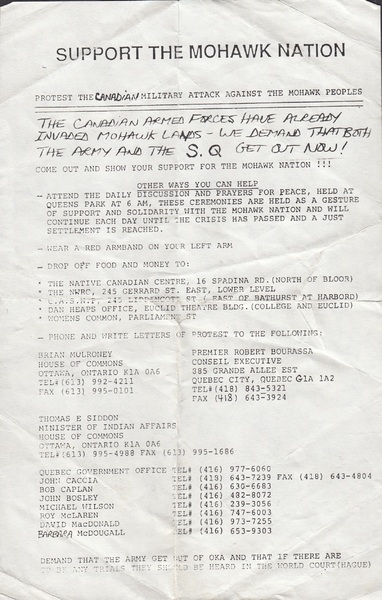 Lobbying against the Columbus Project

In 1989, work began upon Mount Graham in Arizona to construct a telescope as part of the Columbus Project. This project was intended to be a collaboration between the University of Arizona, the University of Chicago, Ohio State University, the Max Planck Institute of Germany, the Italian Arcetri Observatory, and the Osservatorio Astrofisico. The telescope resulting from such an endeavour was intended to utilize cutting-edge mirror technology that would advance the field of astronomy. Mount Graham was chosen for the site of its construction due to it being the only mountain of its size in all of Southern Arizona. Despite all these careful calculations the only factor in the establishment of this $60 million telescope that was not considered were the Apache people, who own the rights to this territory and consider the mountain (known to them as Dzil nchaa si an) to be a traditional and sacred site.

OPIRG Toronto, along with the support of the Student Christian Movement, Science for Peace, and International Socialists formed a working group called U of T Coalition Against the Columbus Project to put political pressure upon the University of Toronto and force them to reconsider their potential involvement with the Project. The group initiated tactics such as rallying protests in front of the U of T Astronomy Department, fundraising for the Apache Survival Coalition, researching and disseminating information about Indigenous environmental rights to increase awareness about the issue, and lobbying other organizations within Toronto to support the cause.

In 1994, the University of Toronto finally made a concrete, public decision regarding whether to involve themselves as a partner in the Columbus Project. James F. Keffer, the Vice-President of Research and International Relations to the Students' Administrative Council announced that due to financial reasons, the University would not be participating in the Project. This decision was not made for the right reasons, as they stated that the Project's impact on the Apache cultural survival would be debated only after they had considered the University's financial position. However, it was not surprising to the U of T Coalition against the Columbus Project considering the University has always placed its corporate interests ahead of human, social, and ecological rights. 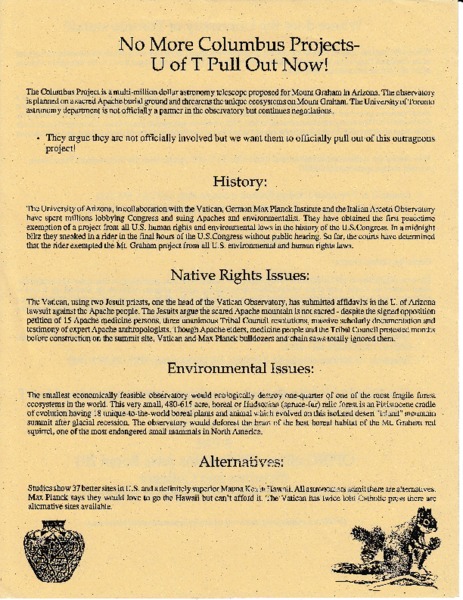 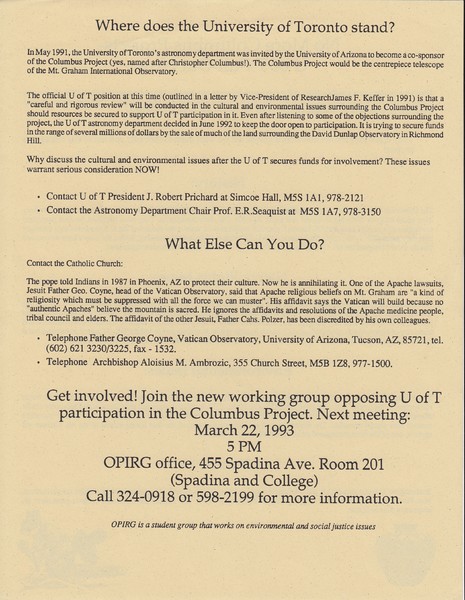 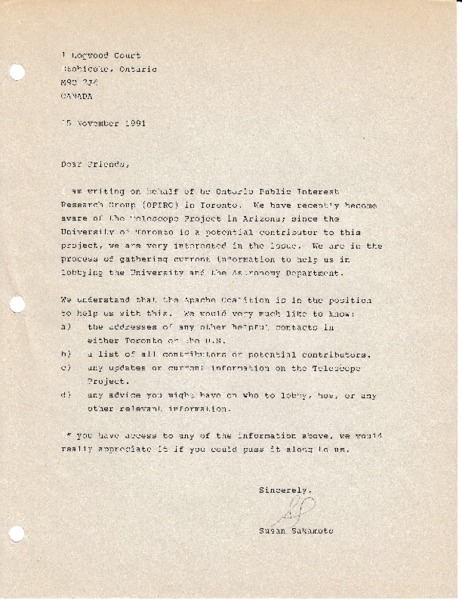 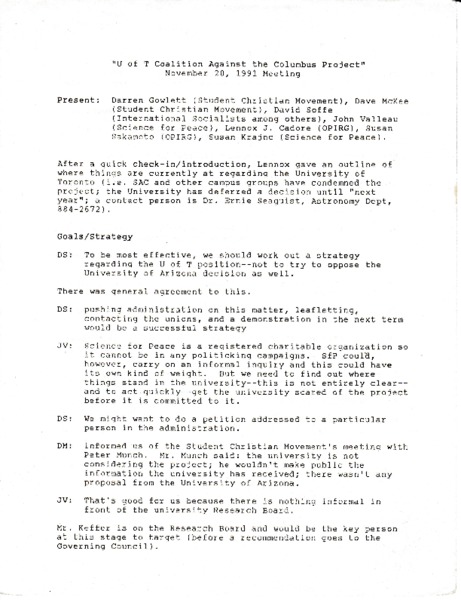 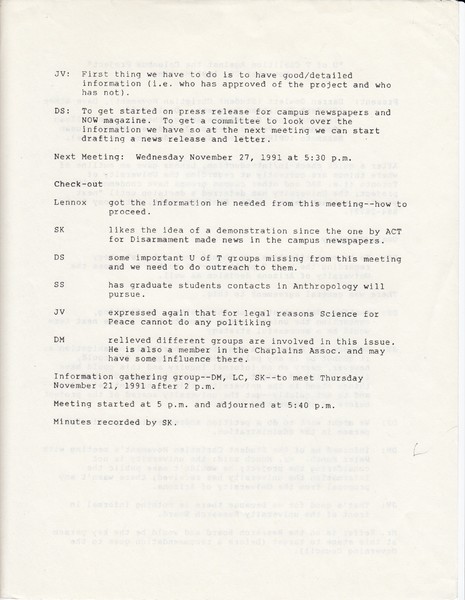 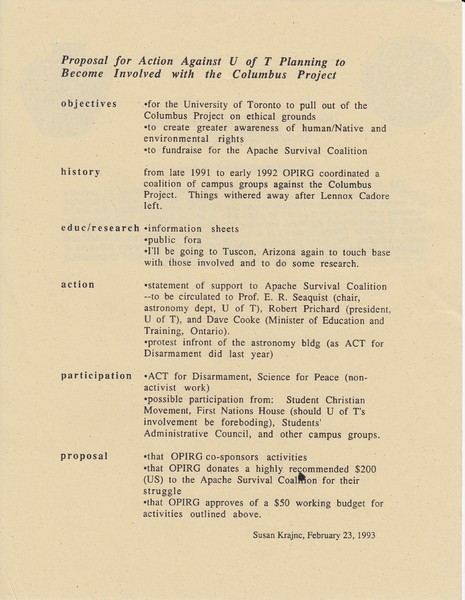 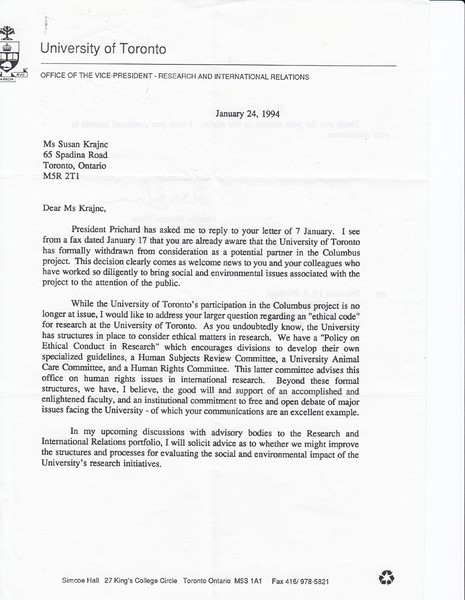 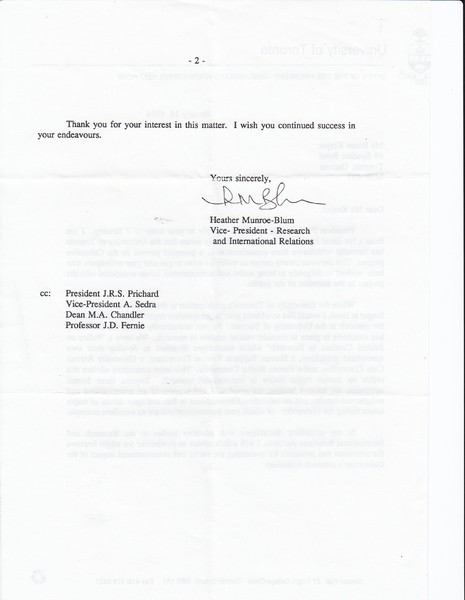 In 1988, the Alberta government granted Daishowa Inc., a Japanese logging and paper manufacturing company with various subsidiaries in the Canadian province, logging rights to the unceded territory of the Lubicon Cree. Representatives of the Lubicon Cree Nation met shortly after with Daishowa to insist that the company refrain from logging on disputed territory while their land claims were settled with the government, however Daishowa refused to provide any concrete agreement to these terms. This sparked an international campaign and a volunteer, non-profit group called the Friends of the Lubicon was established within Toronto that spearheaded the solidarity movement with the Lubicon Cree Nation.

In 1991, the resulting campaign took the form of a consumer boycott against all paper products produced by Daishowa Inc. as well as any companies that refused to cease their use of Daishowa paper products. OPIRG Toronto assisted in solidarity with Friends of the Lubicon by distributing written material informing the public of Daishowa's actions and how to participate in the boycott. Together with public supporters and other Toronto-based grassroots organizations, Friends of the Lubicon hosted picket demonstrations outside of establishments that continued to use Daishowa paper products.

The boycott was extremely effective and successful, resulting in over 50 companies who were initially purchasing Daishowa paper products to announce their support for the Lubicon instead. Reeling from the consequences of these actions, in 1995, Daishowa Inc. sued Friends of the Lubicon, claiming that they were intentionally interfering with their economic relations and therefore should cease in any activities that harmed their relationship with their consumers. The Ontario Court, however, that there was nothing unlawful about the consumer boycott and that the actions of the Friends of the Lubicon aligned with the rights of free speech. What was even more impressive was that Daishowa Inc. responded by publically agreeing to refrain from logging on the unceded territory of the Lubicon, proving that even the smallest acts of community organizing have the potential to spark torrential movements of change. 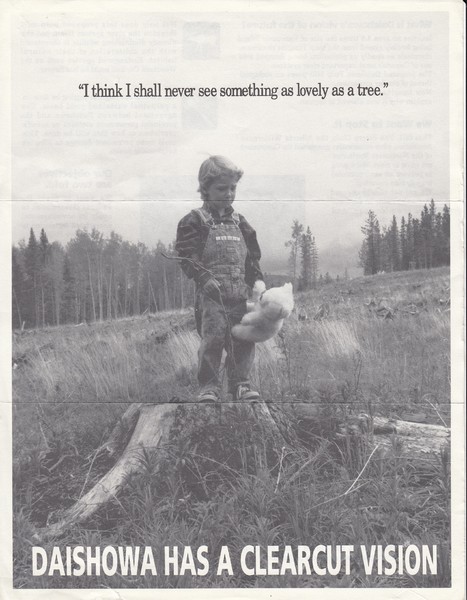 Resistance to Free Trade has a long history in Toronto. In 1988 Toronto hosted the Economic Summit, involving the leaders of seven nations including the United States, Britain, France, West Germany, Italy, Japan and Canada. Free Trade was a hot political issue in 1988 as then prime minister Brian Mulroney supported the principle and had been negotiating a bi-lateral free trade agreement with the United States since 1986.

Leading up to the Economic Summit anti-free trade activists in Toronto began to organize their own Popular-Summit to present an alternative. Free-trade ideologues Ronald Reagan and Margaret Thatcher were going to attend the Economic Summit, and it was a good opportunity to demonstrate public opposition to their doctrine. The Popular Summit was organized by a broad coalition of organizations and involved a series of vision and planning meetings called "The Moment Workshop's" leading up to the summit in June.

Like later free trade talks the Economic Summit included massive and invasive security measures. During the Summit eleven students from University of Toronto were arrested and charged with trespassing during a protest. A spokesperson for the defendants said that they had protested because they believed the global leaders intended to conspire against Latin American countries and that their protest was designed “to prevent many murders.” (Quote from Globe and Mail, Nov 25, 1988)

As we now know the coalition that organized the popular summit was not successful in stopping free trade; Mulroney won an election later that year over the free trade issue and his bi-lateral free trade agreement with the United States came into effect in 1989. As we also know, anti-free trade activists did not slow down. You will see many traces of their organizing elsewhere in this exhibit. 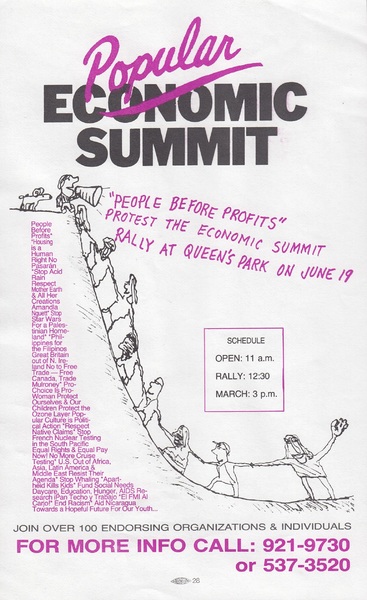 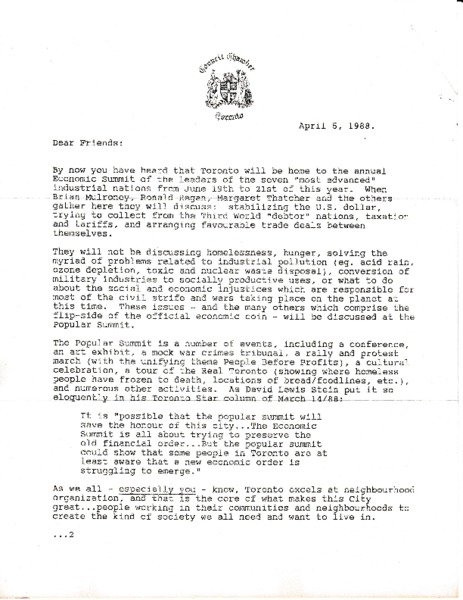 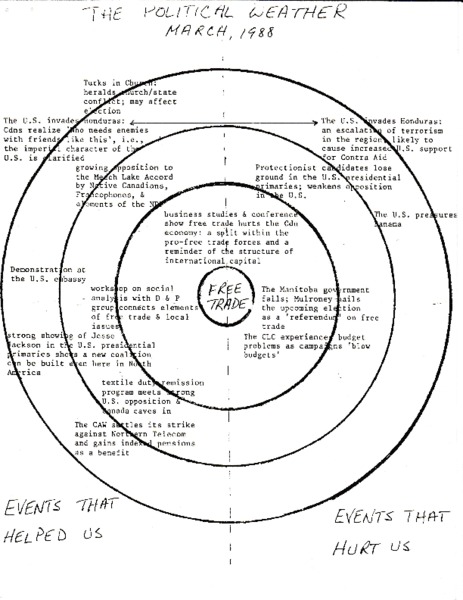 After gaining independence in 1948, a military coup overthrew Burma's government and was replaced with a dictatorship that abolished the people's rights to free speech and free elections while also implementing forced labour. Decades of protests ensued until finally in 1990 the Burmese people were able to hold a free election. Unfortunately, the results were negated by the military junta and all politicians who opposed the dictator were incarcerated, tortured, and some killed. Seeing little opportunity for resistance, the United Nations stated that the only way the dictatorship could crumble was if international organizations ceased trade and economic investment with Burma.

Despite the widespread reports of human rights violations, soft drink titan, PepsiCo, began trade with Burma in 1991. OPIRG Carlton in Ottawa, however, responded by launching a massive campaign against PepsiCo, stating that they must fully withdraw from Burma and cease all trade immediately. Carleton University had placed a deal with PepsiCo to sell only their soft drinks on campus and in order to inflict economic pressure on the corporation, OPIRG Carleton launched a consumer boycott against their products. The campaign gained traction and grew to include the support of OPIRG Carleton's action group entitled the South-East Asia Working Group, other OPIRGs including OPIRG Toronto, as well as universities in the States. Together these student groups utilized the internet in what was one of the first successful cyber activist campaigns to inform the public about how PepsiCo's refusal to completely withdraw from Burma was directly supporting the deaths of Burmese citizens.

Finally, in 1997 after losing much of its public image and a great deal of its potential profits, PepsiCo's shareholders forced the company to cease all economic investments with Burma, citing that the economic losses incurred by withdrawing from the country would be a great deal smaller than what they were suffering at the hands of the consumer boycott. 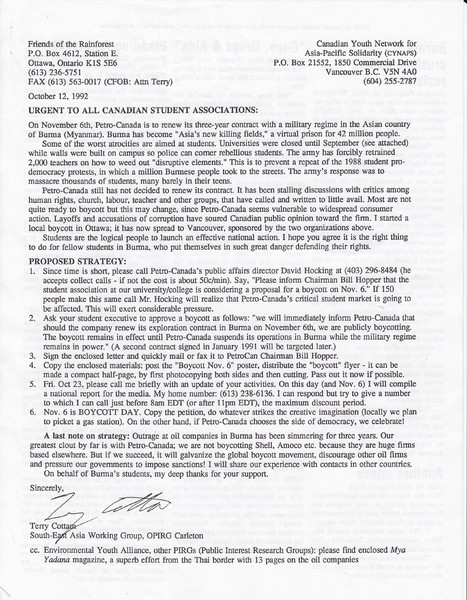 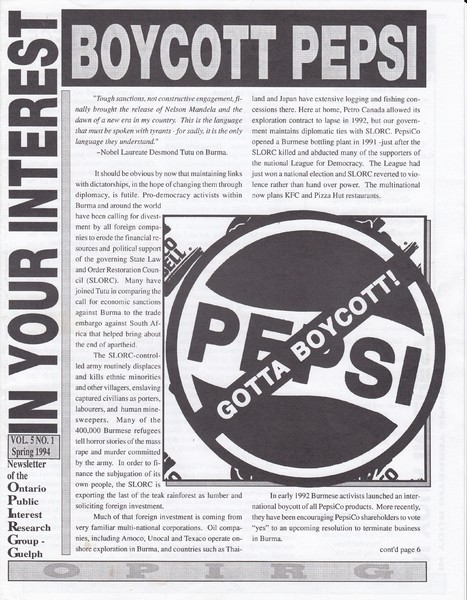 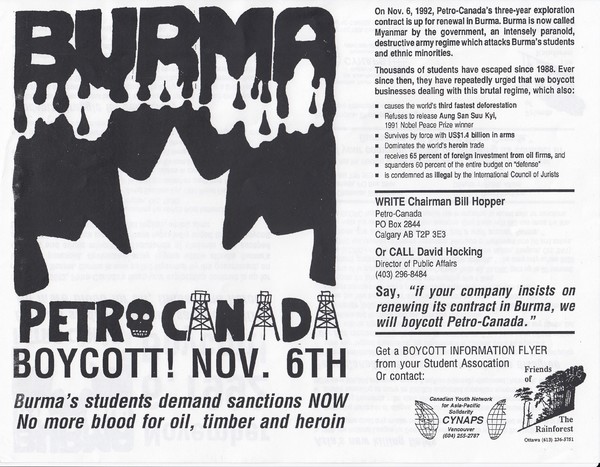 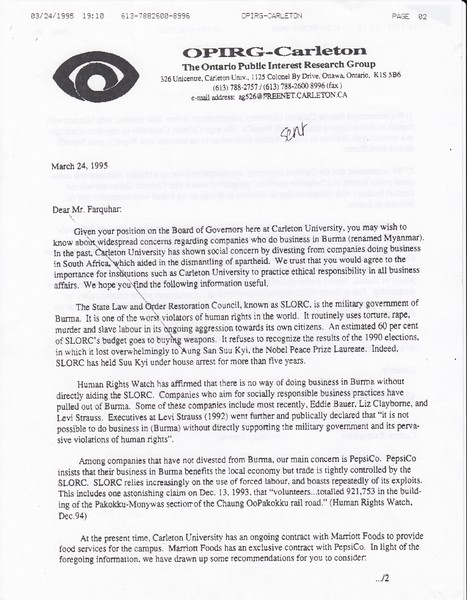 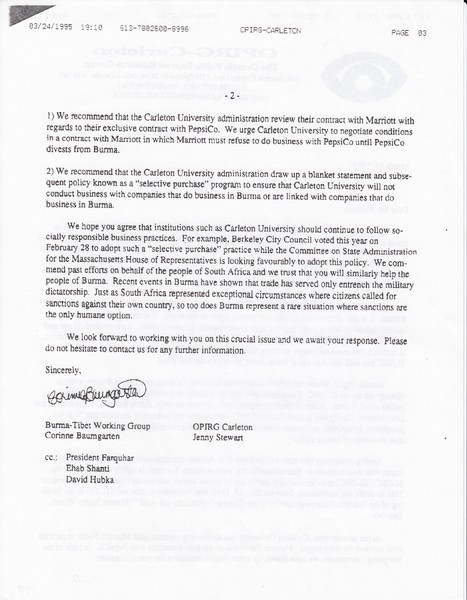 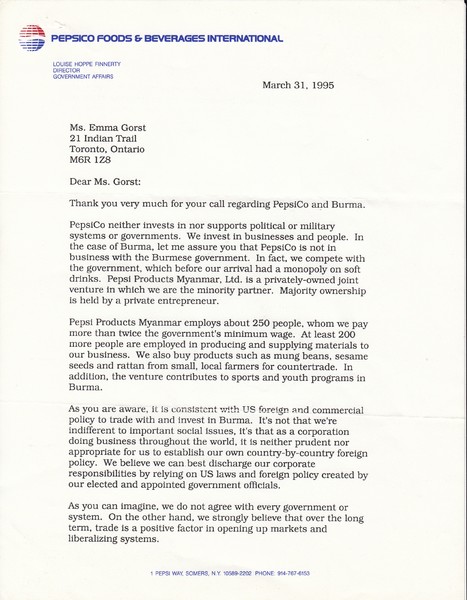 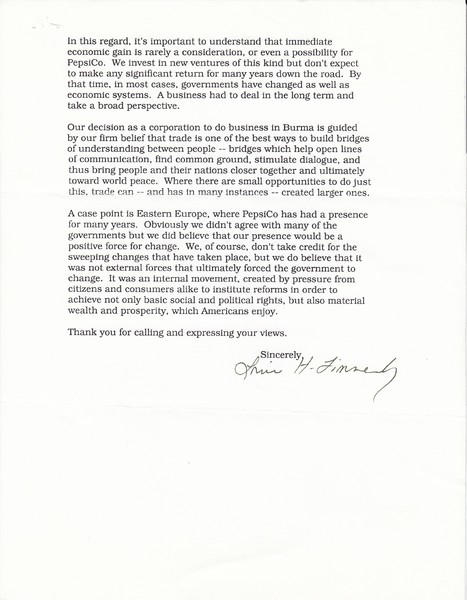 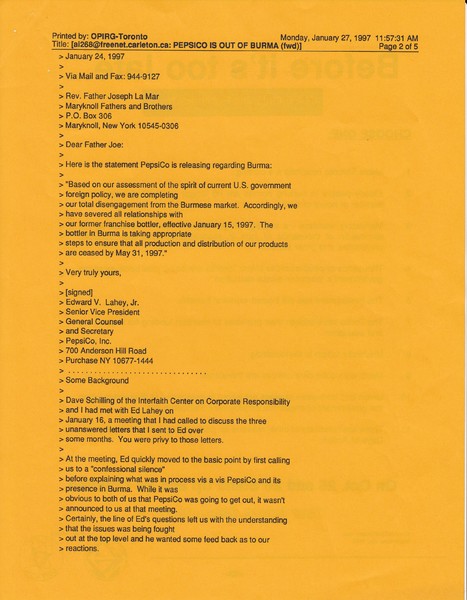