Satirical poster for the Cabbagetown Cultural Festival that purposefully indicated the wrong dates.

The actual dates of the Cabbagetown Cultural Festival that year were September 14 - 16. You will note that on the posters the dates given for the festival are wrong: that was deliberate. It was distributed, surreptitiously, to various locations around Ward 7, such as libraries, community centres, etc.

The Kabbagetown Blackpainters is a made-up name. The reference is to the term "whitepainters" which was widely in use at the time, used to refer to the people who were coming into the area, buying up houses (often rooming houses), and fixing them up. Apparently one of the things that was most noticed was that they tended to paint all the rooms white. We would now use the term "gentrification" instead of "whitepainting." Another commonly used term was "yuppie."

A couple of other references in the poster which may not be obvious:

"Victorian gas station" refers to a gas station at the corner of Parliament and Amelia which was modernized from its original run-of-the-mill gas station look to have a pseudo-Victorian look with red bricks and such. Made it look like the gas stations in mid-1800s Victorian England, one presumes.

The reference to insurance relates to an issue at the time which faced the new middle-class people moving in. The Don Vale area (north of Gerrard) was on an insurance industry blacklist meaning that many insurance companies simply would not insure any house in the area, because of where it was located. This was a problem for the people moving in, who found themselves -- the outrage! -- being treated like poor people.

The person standing beside the real estate sign is Darrell Kent, who was probably the most prominent real estate agent active in the area at the time. 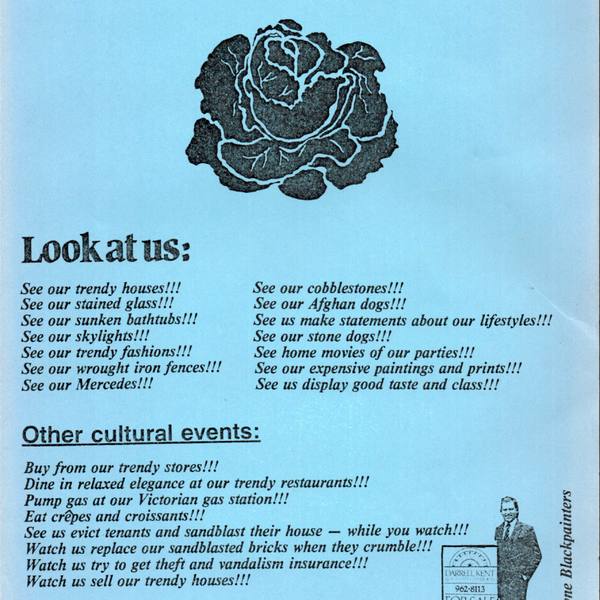